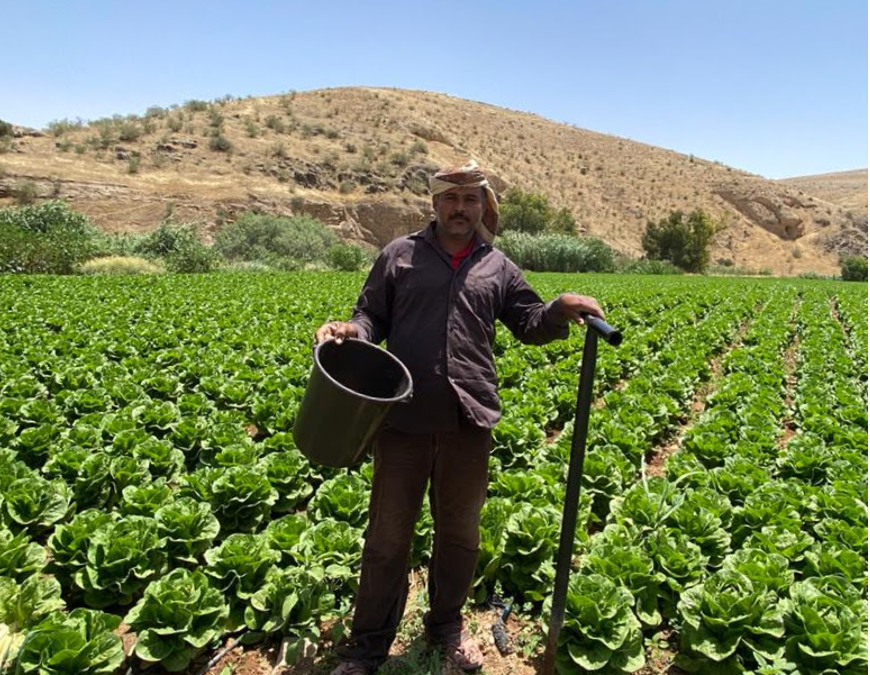 The al Sukhnah region next to Zarqa river is known for its leafy crops, mostly during the hot Summer months. It is a key area, 40 km North of Amman, in providing fresh produce for Jordanians and trading partners in Middle Eastern markets. One of our partner farmers, Mr. al Khawaldeh, has been growing lettuce here for most of his life. Since the last 2 months the project team has set up a pilot activity to improve fertigation practices and increase his earning capacity. After having harvested last week, Mr. al Khawaldeh concluded that the results of the pilot intervention speak for themselves!

As was explained to the partner farmers in previous trainings, the first step to improve fertilization practices is to establish a baseline. A soil sample of the plot was taken and analyzed, together with the irrigation water of the Zarqa river. The soil and water samples were analysed on their acidity, salinity and nutrients. Together with Mr. al Khawaldeh the project team read the results of the analyses and discovered that the soil already has sufficient nutrients available for the initial growth of lettuce. This was mainly due to the organic manure that was applied to the soil at the start of the season (as is common practice).

To put theory into practice, the team created a pilot plot and non-pilot plot of 1 dunum (0.1 hectare) each and compared the standard practices with pilot production on the basis of a soil and water sample. The team recommended to Mr. al Khawaldeh that no additional fertilization would be necessary for lettuce production for the first weeks on his farm. Another soil sample of the pilot plot was taken after the second week of production and analysed, after which the team recommended to start fertilization on the pilot plot as well.

In addition, the pilot plot was only fertilized after 3 weeks, making use of the organic fertilizers still present in the soil. Farmers producing lettuce in this area regularly start fertilization already after the first week of crop growth, as was the case with the non-pilot plot. In the pilot plot the fertigation was only done towards the end resulting in a more steady and controlled growth of the crop during the whole season.

Mr. al Khawaldeh was excited to share the results with his neighbouring farmers and aims to further grow his vegetables on the basis of soil samples.

We use cookies to ensure that we give you the best experience on our website. Read more